Images are commonly used to distort statistics. Such images are not lies, but they ensure the statistics are displayed from the writer's perspective.

A common trick to make a result look more favourable is to change the baseline when presenting the data graphically. Let's imagine someone were making a case that Brits are not ripped off at the petrol pumps compared to Americans. In support of his argument, he might present a graphic like this: 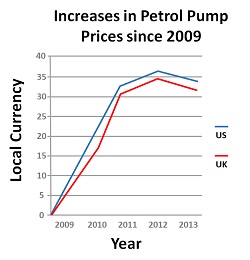 Now, this graph doesn't tell the whole story. Far from it. For a start, the US line and the UK line are plotted against different baselines. The term "local currency" means that one is plotted against pence while the other is plotted against cents. In fact, over the period 2009-2013, the value of a British penny hovered around 1.6 cents. So, if both lines were plotted against the same currency, the US line would be about a third lower on the y axis than it is at the moment. Now, that graph would be far more likely to enrage Brits. But that's only half the story with this graph. This real underhandedness of this graph is that it leads you to assume that prices in the UK and US have been generally equal, but that too is way off the mark. In fact, over the period shown, there was never a time when the UK price per litre was not considerably more than double the US price per litre. But this graph looks to hide that fact too by showing just the "Increases in petrol pump prices". This graph tells you nothing other than US and UK prices tend to follow the same trend, which is of course the price of oil. But, unless you're prepared to scrutinise it, it could easily make you think we're all paying about the same for our petrol. And the sources for this information were very credible indeed. Of course, they're not the ones at fault here. It's the devious git who decided to change the baselines on us.

Truncating the axis of a graph is another way to improve the impact of a statistic. By doing this, a 1% difference can be made to look colossal. 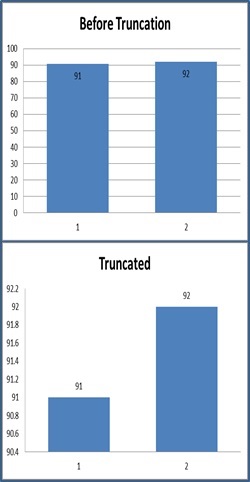 Of course, truncating the axis could be a genuine act to make a graph more useable or simply to save space on the page. However, be aware that this technique is routinely used to exaggerate an effect.

So, if you spot a truncated axis, put your "suspicion glasses" on and give yourself an extra second to scrutinise the figures more closely.

(Conversely, expanding an axis is a good way of lessening the impact of a statistic.)

In a similar vein, it is possible to change the impact of a pie chart by showing it in 3D as opposed to 2D and by exploiting perspective (the closer something is, the bigger it looks) to make a thin slice of pie look like a veritable feast. 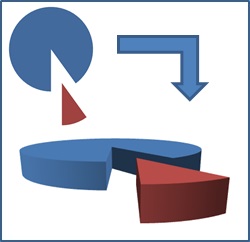 Now, you might think no one would fall for such a blatant trick and that those presenting such a graphic would be running the risk of exposing their biases if they used this technique. Well, that's a fair thought, but it's not accurate, I'm afraid. If you keep an eye out for this method of making something look more substantial than it is, you'll encounter it far more than you might have imagined. People will do anything to strengthen their messaging, especially when the raw figures don't really say too much in their favour.
Help Us To Improve
Please tell us using this form