The Law of Large Numbers

What Is the Law of Large Numbers?

The Law of Large Numbers states: "The result will revert to the mean value in the long run."

In effect, it means the larger the sample size, the more accurate the results.

In a game of chance, good and bad luck evens out as more games are played.

Most adults have been in a bookmaker's at some point. For most of us, it was just the annual flutter on a horse at the Grand National or a quick bet on who'll win this year's Six Nations Rugby. However, lots of us like to bet more seriously, be it on horses or dogs or at casinos. So, can you beat the bookies if you keep going to the betting shop and get really good at it? In a word, no. Returning to the bookies day after day is just a sure way to turn your money into their money.

Why Bookmakers Always Win in the End 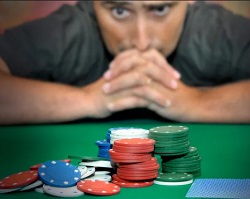 Let's have a quick look at how the bookies are faring. In the first half of 2012, the British bookmakers William Hill made nearly Ł70 million in profits from online operations alone. Since it started in 1994, the National Lottery has taken in over Ł100 billion and raised over Ł28 billion for good causes, which is a gigantic sum. These figures tell us that betting is a hugely profitable enterprise for those that run it. But, given that lots of people win huge amounts on games of chance like the National Lottery and in casinos, how can gambling companies ensure they make money in the midst of all this randomness and apparent good fortune? Aren't they just gamblers too? Well, not really. The reason they're not is the Law of Large Numbers.
"The gambling known as business looks with austere disfavour upon the business known as gambling." (American satirist Ambrose Bierce, 1842–1914)

"The National Lottery is a tax on people who don't understand statistics."
(Anon)
The Law of Large Numbers states: "The result will revert to the mean value in the long run". More simply put, as you keep playing a game of chance, any good or bad luck you've had is slowly cancelled out, and you will move closer to an average amount of luck (the mean). Here's an example. When you toss a coin, each toss has a 50% chance of being heads. Over three tosses, it is possible they will all come up heads. This is less likely but still possible over five tosses...or ten. It's still possible but extremely unlikely over 100 tosses. The more times you flip, the closer your result will be to the expected value of 50% heads and 50% tails. Casinos know this, and weight their games by a small margin in their favour. For example, in roulette, the house profit margin is only between 2.7 and 5.3%. That might not sound a lot, but, in the long term (and remember we could be talking about millions of individual bets), the Law of Large Numbers will prevail, and the casino will come out on top. Provided they can keep us playing, it's guaranteed cash for them. The gambling business doesn't gamble any more than any other business.

Most of us know the odds of winning the lottery are infinitesimal, but it doesn't stop us playing. Well, we can thank our Availability Bias for that. We've all seen stories about lottery winners, and they play a far more significant role in our decision-making than they should. (Personally, I like to think of it as a way of giving money to good causes and funding national-level sport initiatives, and that provides enough impetus for me to yield to my Availability Bias and have a pop at the lottery.)
Help Us To Improve
Please tell us using this form