What Are Relative and Absolute Comparisons in Statistics?

Relative comparisons are commonly used to shock audiences. Even though - in absolute terms - the numbers involved might be tiny, influencers know that headlines such as "500% increase!" catch the eye.

"Facts are stubborn things, but statistics are more pliable."
(American author and humorist Mark Twain, 1835–1910)
Statistics can be moulded into many shapes depending on the whim of the user. And, unless you're looking carefully, it's often difficult to spot the manipulation.

Let's imagine there's a new cancer drug out that, if taken every day, will reduce the risk of stomach cancer by 50%. Fantastic, sign me up you'd say. But, unfortunately and as usual, that's not the whole story. If the cancer rate is 1 in 50 of the population (2 in 100), then the drug will only work for 1 in 100 people. Suddenly, that doesn't sound so impressive. The "50%" describes the situation in relative terms, whereas the "1 in a 100" describes it in absolute terms.

Let's look at another one. "CT scans on children triple the risk of cancer". What? That sounds terrible. I will admit it doesn't look great, but it's the relative increase. Let's say the risk of cancer is 1 in 10,000. The risk after a CT scan is therefore 3 in 10,000. When described in absolute terms, it sounds far less of a problem, especially when you consider that the CT scan is probably being done to detect something eminently more serious like a tumour, a haemorrhage or bone trauma. 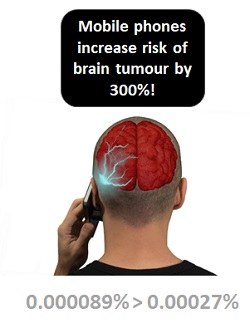 Remember, when it comes to increases in risk, you could be talking about very small increases indeed despite words like "a 300% increase". Often, the headlines are not there to inform you but to shock you into an action, like buying insurance or a newspaper. And, it's for that last reason that journalists in particular like relative comparisons.

Journalists also like trimming their headlines for effect. I once saw a newspaper heading that read: "Bacon increases the risk of dying by 20%". Now, I like bacon, so I read the article. Quite early on, it wandered into other areas of a "typical" bacon-eater's life and – from the perspective of the title – it quickly started hinting at some confounding variables.

With all the padding removed, the article basically offered a comparison for the mortality rate of someone who has a penchant for bacon sarnies, drinks too much, smokes too much and does no exercise with that of a Royal Marine Commando. The headline "fat lazy smoker likely to die earlier than non-smoking fitness fanatic" doesn't quite have the same selling power. What's probably more interesting is that the relative difference between the two was only 20%. Hang on, isn't the risk of dying 100% for everyone? What does that figure even mean? Do they mean dying before the age of 40? 60? 70? Of a heart attack? Of food poisoning? Of a tape worm? Remember, as soon as you present some statistics, be ready to have them scrutinised.