Using the Difference Types of Average to Deceive

The use of averages to deceive is a common trick used by statisticians. Deception is achieved by failing to explain whether the average cited is the mean, median, or mode.

Do you remember "mean", "median," and "mode" from school Mathematics classes? Most people will take the word "average" to represent the "mean average". That's when you add up all the numbers and divide by how many numbers there are.

Here's a set of numbers:

Lastly, the word "average" could be referring to the mode average. That's the most frequently seen number in the set. In this case, it's 1 (which features twice). 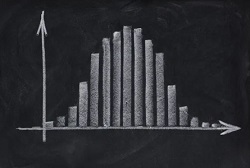 When we're talking about a normal distribution of values (or "bell shaped" distribution as it's known; e.g. a typical school test, where a couple of people do really well, a couple do really badly, some do pretty well or badly, and most are somewhere in the middle), then the mean, median and modes averages will be approximately the same. However, when we're talking about a random distribution of values, the type of average chosen can dramatically affect the value that is presented as the "average".

Look at these test results:

With the 9% score, I could claim that my score was above average. (I would, of course, be using the mode average when making this claim.)

And what about this claim:
"Half of all doctors are below average in competence."
With this claim, the mean average is being used. It's a true statement, but it's a meaningless one. Half of any normally distributed group you choose is below the mean average. But it still sounds bad. There's more fun you can have with this idea. For example, you can disguise the group you're talking about.
"Don't fly with Trower Airlines. It has been statistically proven that half of its pilots are below average."
Now, as we're talking about the mean average of all the pilots in Trower Airlines, that's a true but meaningless statistic. But, the connotation here is that a test has been done with every pilot of every airline. If that were actually true, it would not be a meaningless statistic. It would mean Trower Airlines employs below-average pilots when compared with other airlines.

So, why do we need three different kinds of average? Let's take a quick look at each one.

Mean Average. Mean is the most common average, and it's the one that people will think you're talking about if you don't specify which average you're using. Mean average is useful when a central tendency or middle figure is needed, but its weakness is that is can be badly skewed by outliers. For example, it would be useful in measuring the average salary of a group of metal workers in a factory, but it would be less useful in measuring the average salary of everyone in the factory, because the factory owner's and executives' salaries would skew the mean figure. As a result, a senior manager could find himself on a "below average" wage.

Median Average. Median is useful when the distribution has outliers. These are numbers outside the normal set that will skew the mean but will not affect the median. For example, if we were to look at the average age of a school class, the mean will be skewed by the age of the teacher. The median, however, would give us a better idea of the age of the children.

Mode Average. Mode is useful when the things being compared do not have numeric values. If we wished to look at the average bank account held by a group, we could use the mode.

Don't forget the word "average" could have vastly different values for the same group depending on which average the author chooses. Don't think others won't spin this idea to their advantage. It will be used against you, so be on your guard.

Learn more about averages with our sister site, Mathematics Monster.

Finally, before we leave averages, here's a quick word about ordinal sets (that's when data has been ranked in an order). When a newspaper publishes a list of the 10 best films, you cannot say that number 5 is the average "best film". You cannot create a mean from an ordinal set.

Similarly, the top film is not three times better than the third film. There's no relationship between the numbers on the list other than how they're ordered. That seems like an obvious point, but as half the people reading this book are below average (compared to the other half of people reading this book), I thought I'd better spell it out.
Help Us To Improve
Please tell us using this form