How to Read Body Language

Reading body language is a useful skill. It requires observations of eyes, face, hands and arms, and legs and feet as well the pitch, speed, volume, and tone of voice.

When a chimp screams and bashes its sibling over the head to retrieve a banana, the verbal and physical actions occur at the same time. We humans, however, prefer to resolve our differences using speech first, and that's what we think we're doing most of the time. We're not. In fact, we're also performing simultaneous physical actions – even if they're not as blatant as a bash over the head. 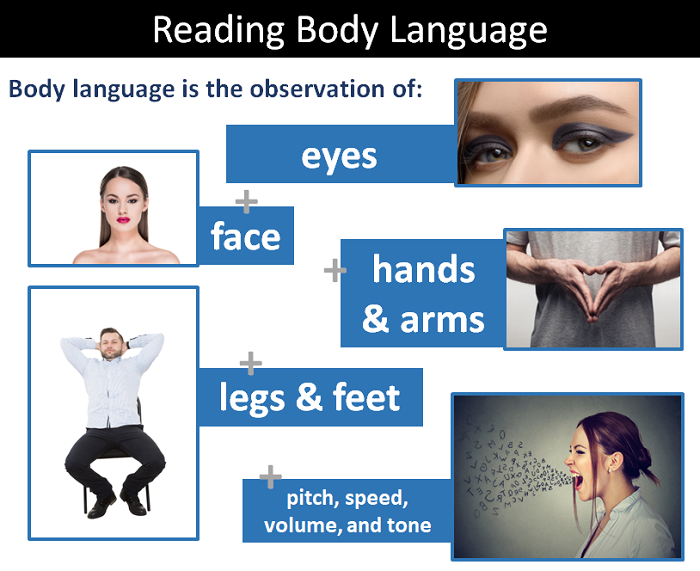 The Benefits of Reading Non-Verbal Communication 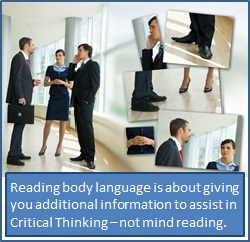 Scientists will tell you that speech only conveys about 7% of your message. That seems a bit low to me, but it's a fairly consistent figure in the world of those who look at this stuff. They also say that 38% of the message is in the pitch, speed, volume and tone of voice, leaving a massive 55% of the message conveyed by body language. Even if that figure is four times as high as reality, it still stands to reason that reading people's "non-verbal communication" will provide a valuable insight into what they are thinking. Sometimes it will confirm what they're saying, but sometimes it will contradict their words and give you clues as to what's really going on.

When people talk, they complement their words with various body movements (e.g., nose touching). Some of these body movements are known as cues. Everyone transmits these cues unconsciously, and, if you miss them, it can be like trying to read a book with loads of the pages torn out.

The ability to read non-verbal communication will also help you to gauge how your messages or arguments are being received and how your opponents think they're doing in countering them.

Reading the Different Parts of the Body

We have divided the body into discrete segments and look at the cues (known in poker as "tells") from each segment. The tells are the behaviours that you exhibit unconsciously that reveal the inner you. For example, if your arms are crossed close to your body, it can indicate you are unhappy or being defensive. We're only looking at individual body areas and their associated tells because it is the easiest way to study them. However, the most important point about reading body language is that you usually need to read several tells that indicate the same inner emotional state to gain an insight into what is going on – you cannot rely on just one tell. When a cluster of tells points to the same inner emotional state, they are said to be in "congruence". It is then your job to determine whether the cluster of tells is congruent with what your target is saying. Detecting a lie is the holy grail of body language interpretation, but it is difficult to do with certainty. 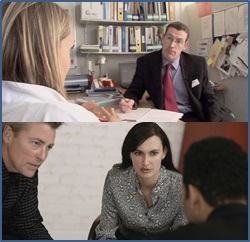 If you're a driver, you will know that you can eat up miles of motorway with the active part of the brain disengaged from driving while you daydream. When you snap out of this state of "autopilot", you don't actually remember driving or any details of what you've passed. However, this mind state doesn't occur at junctions or town driving. That type of driving needs more mental effort.

"Active observation" is like "active listening". When you're listening actively, you don't just let the sounds wash over you, you concentrate on them to extract as much as you can. When talking face to face, most people let the images wash over them, but it is possible to concentrate on what you're seeing to extract as much as you can – you might just discover the ability to read people in a way that you didn't think possible. Before we get into the detail, here's a top tip. You must be very subtle with active observation. Be careful not to stare unnaturally at your target and certainly not as if you are auditioning for the part of Count Dracula, because this will definitely alter their behaviour towards you (and not in a good way). 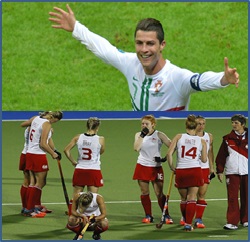 Your posture (the way you carry yourself) can be indicative of your emotional state. Think of a football team that has just won the FA Cup. They stand with their backs straight, and their heads and hands held high. They maintain eye contact, and they look at the world like the champions they are. On the other hand, the defeated players look down at the ground, their shoulders are slumped, and their arms are by their sides. Their heads are withdrawn into their shoulders like a tortoise into its shell. That's all pretty obvious. But more subtle postures can be revealing too.

As we've covered, a person will unwittingly communicate lots of free and sometimes secret (from his point of view) information about how he thinks your interaction is going. And, as we've also touched on, the person you're interacting with will respond subconsciously to your body language. So, reading body language can both improve your understanding and allow you to exert some influence. Whilst these benefits could be crucial to a business or social success, more often than not they just give you an edge that might otherwise be lost.

You will, of course, read information and exert influence using your body language naturally, so the margins to be won by doing it deliberately could be very fine. This benefit must be balanced with the risk of being caught applying body language deliberately or just looking weird through over-observing or staring. 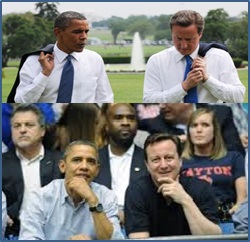 Mirroring is a subconscious copying of gestures. At the most basic level, if someone smiles at you, you smile back. If a colleague across the desk yawns, you might yawn. This happens more than you might think. If you watch a newly dating couple in a restaurant, their body movements and postures are often mirrored, if they're getting on. This happens naturally, but you can fake it. In both social and business contexts, you can use mirroring to achieve a positive effect. For example, if you copy your target's movements (e.g., chair positioning, hand positioning, enthusiasm, yawns, coffee drinking, biscuit eating) and your mirroring looks natural with a delay that is sufficient to mask your game (usually 10-15 seconds), then your target could subconsciously develop an affinity with you that might develop into added respect for your views. Warning: if you mimic the movements exactly and immediately, your target might think you're mocking him. If you're caught mirroring (and lots of people are aware of this technique so be careful), you're toast. The best bet is to do it very subtly, leaving enough room for plausible deniability. The mirroring game will also keep you awake at a boring meeting, and you might end up being the only person looking at the talker. At the very least, he'll take that as a sign of your interest, and that in itself will do you no harm whatsoever. It's a win-win – provided you're not caught. 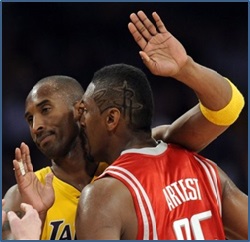 "Personal space" is the area surrounding a person into which any encroachment feels threatening or uncomfortable. The size of someone's "personal space" varies from person to person and from culture to culture. It is different in urban environments than in rural ones, and it varies according to the situation. As a general guideline though, "personal space" with strangers is about 1.2m, with work colleagues is about 45 cm, with friends is 15-45cm, and with a partner is 0-15cm. (The branch of knowledge that deals with the amount of space people want for themselves is known as proxemics.)

When you're on a crowded tube, others are forced into the personal space you would normally reserve for your nearest and dearest. As a result, you seek to distance yourself mentally from the fat tourist breathing in your ear by avoiding eye contact. (Next time you're on a busy tube at rush hour, check out how many people are looking at everything except each other.) This is all to maintain the illusion of personal space.

People like their personal space, and you can exploit that. If it suits you to intimidate someone or to make them feel uncomfortable (perhaps you need them out of the room for whatever reason), you can attack his personal space to achieve your aim.

This can of course be applied to those who are trying to intimidate you. As they encroach into your personal space, understand what they are doing and stand your ground. It will feel uncomfortable at first but, because it is no longer happening unconsciously, you will be better able to deal with the encroachment. I have even seen people deliberately lean towards an intimidator to give them a taste of their own medicine. 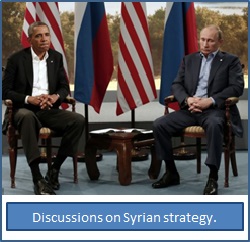 Reading body language is a useful skill once you have mastered it, but it is only one of the clubs in your golf bag of skills to help you read a situation. While a high proportion of our messages are non-verbal, reading that non-verbal part of the message accurately can be challenging. There are definitely advantages to be seized and influence to be exerted by reading and presenting body language, but do not expect it to be the silver bullet for all your problems. And it might seem an obvious point, but do not forget to concentrate on what is being said. You also need to analyse any arguments made for their logical and intellectual merits. There's a lot to be thinking about, but, if it were easy, everyone would be doing it.

There are five simple points to remember when you are looking to use body language to garner additional information to support your own arguments or undermine someone else's:

1. Know what you are looking for
2. Actively observe
3. Understand the context
4. Avoid getting caught observing
5. Use it as a guide, not a gospel