Cognitive effects are tendencies that cause thinking errors. For example: Cognitive effects should not be confused with cognitive biases (which typically cause a component of an argument to be under- or over-weighted) or with cognitive fallacies (which are reasoning errors caused by misunderstanding how the components of an argument relate to each other). 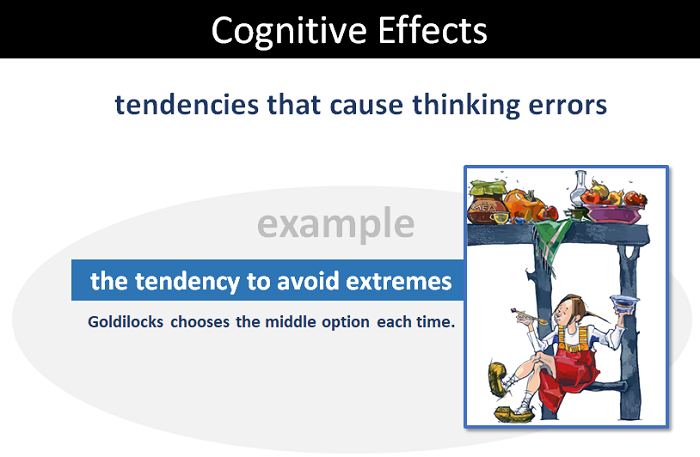 The Barnum Effect occurs when people believe that general descriptions are accurate descriptions that relate to them. This occurs most commonly when describing personality traits. The Broken Biscuit Effect occurs when a person invents an irrational justification for their actions. Even though the person knows the justification is irrational, it still provides the impetus to carry out the action. It derives its name from the irrational notion that "broken biscuits have no calories", which a dieting person will cite before consuming a broken biscuit (or one with slightly imperfect edging) or breaking one before eating it. When choosing something, the Compromise Effect is the tendency to avoid an extreme choice. Avoiding an extreme choice is often due to the common perception that extremes attract risk. As the middle ground feels safer, decisions that exclude extremes are made far more readily. The Dunning-Kruger Effect is the tendency for unskilled people to make poor decisions or reach wrong conclusions, but their incompetence prevents them from recognising their mistakes. It links well with the old adage: "Ignorance is bliss." In uncovering this tendency, Justin Kruger and David Dunning of Cornell University were partly influenced by this observation: "Ignorance more frequently begets confidence than does knowledge." (Charles Darwin) The Endowment Effect describes the tendency to place more value on something you own than something you don't. The Halo Effect is the tendency to judge someone positively because of a known positive trait. This can occur regardless of whether the judgement is related to the trait. Hyperbolic discounting is the tendency to show a preference for a reward that arrives sooner rather than later. Studies show that we are likely to discount the value of the later reward more as the length of the delay increases. The Isolation Effect (also known as the Von Restorff Effect) is the tendency to recall something that stands out in a group and afford it more weighting than its peers. It is named after German psychologist Hedwig Von Restorff, who first documented it in 1933. The Ostrich Effect is the tendency to ignore a dangerous or risky situation. This bias takes its name from the widely held, though completely incorrect, belief that an ostrich will bury its head in the sand when faced with danger. People will demonstrate this kind of behaviour by blotting out a problem from the mind instead of tackling the situation that threatens them. The Rhyme As Reason Effect is a cognitive bias that causes a rhyming statement, observation or saying to be judged more accurate than an equally valid non-rhyming one.