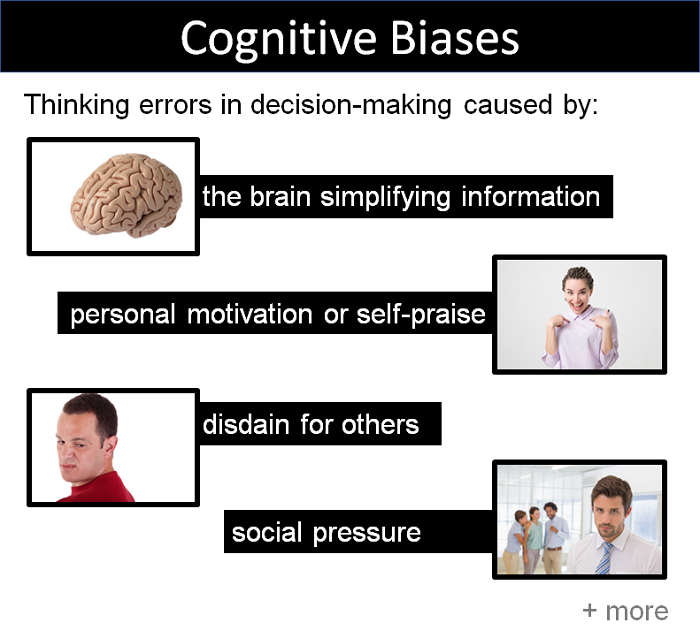 Below is a list of 23 common cognitive biases that affect us all.

When making decisions, Anchoring is a bias that involves factoring in one piece of information too heavily. Anchoring occurs when a person overly relies on, or anchors to, a specific piece of information. Once the so-called anchor has been established, there is a bias towards the anchor. Attentional Bias causes people not to examine all possible outcomes when making judgements. In other words, their attention is on just one or two of the possible outcomes. The rest are ignored. A common type of Attentional Bias is one in which two conditions can be present (see the example below), meaning there are four possible outcomes. However, those displaying Attentional Bias will not consider all four. Availability Bias is the tendency to let an example that comes to mind easily affect decision-making or reasoning. When making decisions or reasoning, the Availability Bias occurs when a story you can readily recall plays too big a role in how you reach your conclusion. In decision-making and reasoning, Better than Average Bias is the tendency to place too much emphasis on your own views. Choice Supportive Bias is the tendency for a decision-maker to defend his own decision or to later rate it better than it was simply because he made it. Confirmation Bias is selective thinking where information that confirms a preconception is: (1) automatically noticed (2) actively sought (3) overvalued and (4) accepted without reservation. On the other hand, information that contradicts the preconception is (1) automatically ignored (2) not sought (3) undervalued and (4) rejected out of hand. In summary, Confirmation Bias occurs when someone has reached a conclusion and shapes the evidence — either knowingly or unknowingly — to make it fit. Confirmation Bias will also cause people to recall memory selectively or interpret events in a way that supports their preconception. Contrast Bias is the tendency to promote or demote something in a large grouping after a single comparison with one of its peers. Distinction Bias is the tendency to view two options as more dissimilar when assessing them together than you would if you evaluated them separately. In decision-making and reasoning, Good Looking People Bias is the tendency to place more weight on the views of good-looking people than average-looking or ugly people. Groupthink occurs when decisions are made due to the unified nature of decision-makers. It happens when the decision-makers strive for unanimity, and this overrides their motivation to consider alternative views. As a result, independent thinking is lost. Hindsight Bias is the tendency to think that past events were more predictable than they actually were. Impact Bias is the tendency to overestimate the length or the intensity of future feelings in reaction to either good or bad occurrences. Mirror Imaging occurs when a person or a group is viewed through the lens of the analyst's own environment and experiences, rather than from theirs. Moral Credential Bias occurs when someone's history of making fair judgements gives rise to a sense of "free licence" in the future. Negativity Bias is the tendency to give more weight to negative experiences or information than to positive ones. News Media Bias is the media's tendency to run stories that are commercially viable, topical, and visually interesting. (While it may sound counter-intuitive, the media's attempt to avoid bias also creates a bias.) Omissions Bias is the tendency to judge activity that causes damage as worse (or less moral) than inactivity that causes the same damage. Reactance Bias is the tendency to do something different from what someone wants you to do in reaction to a perceived attempt to constrain your freedom of choice. Reactance Bias can occur when you feel pressured to accept a certain view and can lead to a strengthening of resolve for an alternative view, regardless of its relative merits. Self Serving Bias is the tendency to take credit for positive outcomes or to lay blame elsewhere for failures. There are two main motivations that lead people to act in this way: (1) They are trying to create a positive image of themselves, or (2) They are trying to preserve their self-esteem. Status Quo Bias is the tendency to favour decisions that maintain the status quo (i.e., the existing state of affairs). Those affected by this bias choose not to divert from established behaviours unless there is compelling incentive to change.