What Is the Appeal to Authority Fallacy?

In Critical Thinking, the Appeal to Authority Fallacy is unquestioningly adopting the same position as an expert.

Don't immediately adopt the same position as someone you think is an expert. Firstly, he might not be an expert in that field, and, secondly, other experts might not agree with him. If you do adopt the expert's position, you might be committing the Appeal to Authority Fallacy.

The Appeal to Authority Fallacy is an error in reasoning that occurs when someone adopts a position because that position is affirmed by a person they believe to be an authority.

An Example of Appeal to Authority Fallacy

Human beings only use 10% of their brains

Learning from teachers is critical to human development, so we have a strong tendency to trust the word of perceived experts, especially if we're in unfamiliar territory. But, when someone you're arguing with cites an expert in support of their argument, you shouldn't yield straight away. The strength of his argument still depends on two things: 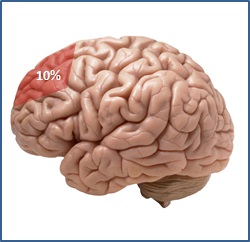 Remember, it doesn't have to be true just because an authority said it. It is still worth digging into why the authority believes it to be true. Simply saying "Here's a person who's better than us – listen to what he thinks" is a meaningless premise on which to base an argument. Here are a couple of examples of world-class authority figures spouting nonsense:

Theoretical physicist Albert Einstein, who is regarded as one of the most brilliant minds of the 20th century, stated that human beings only use 10% of their brains. This claim is widely taken as fact, because Einstein said it. However, it's nonsense. Albert Einstein was no neurobiologist. 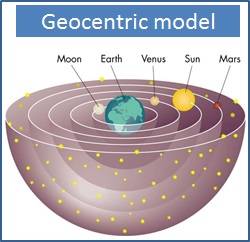 In the early 17th century, the world's leading astronomers (most famously Galileo) were refining Copernicus's theory that the Earth revolves around the Sun (the heliocentric model of the universe). The evidence was looking pretty good for Copernicus's theory being right, but the astronomers had to tread carefully when presenting this evidence because it contradicted the idea that God placed the Earth in the middle of the universe (the geocentric model). This whole debate placed Pope Urban VIII in a difficult situation, but, being open minded, he encouraged Galileo to publish the arguments for and the arguments against heliocentrism. Galileo did what the Pope asked, but his paper did not strike a good balance. It contained way too many arguments for. Galileo also couldn't resist taking a few cheap shots at the Pope and geocentrism. That was a bad judgement. Somewhat annoyed, Pope Urban put Galileo under house arrest for the last few years of Galileo's life. For a while, the Sun continued to go "dutifully" around the Earth because no one dared question the authority of the church. For that short period (before the astronomers re-mustered to champion heliocentrism again), those backing the argument that the Earth was at the centre of the universe were committing the Appeal to Authority Fallacy. The Pope might have been one of the most eminent authority figures on the planet, but he was no astronomer.

So, if someone throws an "expert" into his argument, get ready with some words like this: "That is a fallacious argument. Your expert is not a legitimate expert in that field, and it is doubtful many experts would agree with him."

Another Example of Appeal to Authority Fallacy

Every prison has a false bar

There is an excellent example of someone naively taking an expert's statement as read in The Simpsons. The scene starts with Homer and all his mates (including Police Chief Wiggum) being locked up in a prison cell. It was one of those cells with no front wall but just long bars from the floor to the ceiling. The type you see in westerns.

After a few seconds, Chief Wiggum says: "During police training, I was told there's always a false bar to allow a quick escape in the case of a fire." Starting from the right, he proceeds to knock on each bar one at a time, saying "Not this one" each time. As he gets to the last one on the far left, he doesn't bother testing it. He just says "And, so, by a process of elimination, it has to be this one." Wiggum takes a step back and runs at the bar like a bull, head butting it has hard as he can. Clearly, the bar is not a fake, and he crumples to the floor, squealing loudly.

I'm describing this incident in The Simpsons because it stemmed from Chief Wiggum being told that every prison had a false bar by one of his seniors. Wiggum was so confident in what that expert had told him, he didn't think to question it one iota. In doing so, he committed the Appeal to Authority Fallacy. It's a belting example.

A Practical Example for Appeal to Authority Fallacy

Who is saying that exactly? 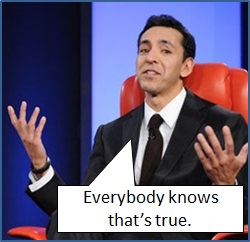 Sometimes the people you're arguing with can't be bothered to research a genuine authority, so they just throw in a vague opening statement to make it look as though someone in authority supports their argument. Here are some common examples:

Each of these is an example of an Appeal to Authority Fallacy because a valid authority is one that can be checked and tested.

If you train yourself to spot these appeals to unnamed authorities, you can undermine a difficult interview very easily.

You shouldn't feel bad about smashing people who try to attack you with an appeal to unnamed authority. After all, they are looking to create an "invisible magic flaming sword" out of nothing and wield it against you. You can take it off them and hit them with it.

It's hard to avoid an appeal to an unnamed authority – it is a very natural way to start a statement. Our advice? Spot 'em and bash 'em – especially if you don't want to get tied down by what they've really got to say!

Summary of Appeal to Authority Fallacy

If you think someone has adopted a position to align with an authority whose facts or credentials don't withstand scrutiny, tell them they have committed the Appeal to Authority Fallacy.
Help Us To Improve
Please tell us using this form