What Is an Ad Hominem Argument?

In Critical Thinking, an Ad Hominem Argument is one that attacks the person rather than their argument.

Don't attack people's personalities or beliefs to undermine their arguments. That's called an ad hominem argument. Stick to the facts in the argument.

An ad hominem argument (ad hominem is Latin for "to the man") occurs when someone tries to contest a claim by highlighting the negative characteristics or beliefs of the person making the claim rather than contesting the claim itself.

There are many different types of Ad Hominem Argument, but they all share the same idea: they're all an attack on the person and not an attack on the facts of the claim. Here are some examples: These arguments are all errors in reasoning. A person's looks, expertise, motivation, beliefs, actions, and rank are not, in themselves, evidence that their argument is invalid. 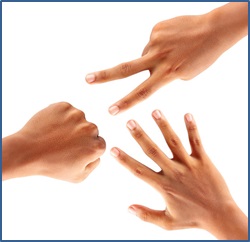 A common form of Ad Hominem Argument is countering a claim based on who the claimant is. (This is often called the "shut up" fallacy.) This idea is well captured by military's version of the game "paper, scissors, rock," which is called "paper, scissors, rank badge," which is often used as a decision-making tool. In the military version, the highest rank badge trumps everything!
"Corporal Jones and I had a game of paper, scissors, rank badge and have ascertained that I was right."
Of course, ad hominem arguments are not always wrong. There's another side to them. If someone is a known liar, there's a greater chance he's lying again. If someone is set make money if his claim is true, you should be more suspicious. Therefore, you shouldn't fully attack a person's claim based on their characteristics or beliefs, but you must factor them in. You will do this naturally so don't expend too many calories trying to strike the right balance.

A Practical Application for Understanding the Term "Ad Hominem Argument"

Put 'em back in their box

Knowing about ad hominem arguments is far more useful when you're on the receiving end of the attack. Most people are programmed to attack the presenter of the argument rather than the argument itself. (It's far easier for a start.) Attacks with words like these are pretty common: 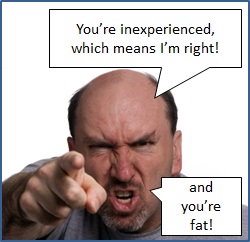 "Your attack on me doesn't change what I'm saying."
(If you don't want to come across as snotty.)

"Please stick to the point. Your ad hominem attack on me is fallacious reasoning and only serves to cloud the issue."
(If you want to put your attacker back in his box and you don't mind coming across as snotty.)

Summary of an Ad Hominem Argument

If you think someone has attacked a person's evidence based on that person's looks, expertise, motivation, beliefs, actions or status, tell them their ad hominem argument fails to address the pertinent issues.
Help Us To Improve
Please tell us using this form