What Is the Ostrich Effect?

In Critical Thinking, the Ostrich Effect is the tendency to ignore a dangerous or risky situation.

Easy Definition of the Ostrich Effect

Don't ignore the bad things happening. That's the Ostrich Effect. It doesn't make them go away.

Academic Definition of the Ostrich Effect

The Ostrich Effect is the tendency to ignore a dangerous or risky situation.

This bias takes its name from the widely held, though completely incorrect, belief that an ostrich will bury its head in the sand when faced with danger. People will demonstrate this kind of behaviour by blotting out a problem from the mind instead of tackling the situation that threatens them. As shown in the lesson on reading people's eyes, this also occurs at a subconscious level with the "eye block" gesture.

An Example of the Ostrich Effect

Afghans have been telling us for years that Pakistan has been backing the Afghan Taliban and housing its leaders and those of Al Qaida, including the late Osama Bin Laden. As this is the same Pakistan that the US is funding with billions of dollars each year to ensure Pakistan's nuclear weapons don't fall into the hands of extremists and to assist in the battle against Islamic extremism, the US didn't want to believe the masses of evidence being gathered by its intelligence agencies about Pakistan's duplicity.

"Denial's not just a river in Africa."
(Common joke amongst intelligence analysts)

For years, America's "denial" of Pakistan's dual strategy was the world's best example of the Ostrich Effect, but it seems the US ostrich has finally extracted its head from the sand, leaving the Pakistanis playing the plausible deniability card about as hard as it can be played.

A Practical Application of the Ostrich Effect

Ignore it, tackle it or manage it, but make a decision 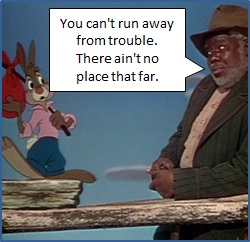 The only real practical application for the Ostrich Effect is to understand it to improve your decision-making. Sometimes ignoring a problem is a good thing:

"No problem is so formidable that you can't walk away from it."
(American cartoonist Charles M. Schulz, 1922–2000)

Sometimes though, you have to embrace it:

"You can't run away from trouble. There ain't no place that far."
(Fictional teller of African-American folktales Uncle Remus, written by Joel Chandler Harris)

And, sometimes, there's a middle ground:

"When you can't solve the problem, manage it."
(American minister and author Robert H. Schuller)

The secret to handling problems is knowing which approach to take. If you actively embrace the Ostrich Effect, you are ignoring the problem. That's fine. It's a technique that works for certain types of problem. But if you allow the Ostrich Effect to blot out a problem that can't be handled in that way, you end up reaching for the place that Uncle Remus (see quotation above) tells us is unreachable. In other words, you are just delaying the inevitable. If you know this is happening (i.e., you can say "I am being consumed by the Ostrich Effect"), you are more likely to face the demon earlier (which more often than not is beneficial). Therefore, understanding the Ostrich Effect will help you in your decision to ignore, tackle or manage the problem. Once you've picked a course of action, try not to worry about the problem. Of course, that's easier said than done. I wish I were better at following this classic Buddhist mantra:

"If you can solve your problem, don't worry about it. If you can't solve it, then what's the point in worrying about it?"
(Paraphrase of quotation by 8th-century Indian Buddhist scholar Shantideva)

Here's the main point again. Understanding the Ostrich Effect will help to ensure you don't ignore the problems you should be tackling.

Summary of the Ostrich Effect

If you think someone is ignoring a bad situation in the hope it will go away, tell them they are embracing the Ostrich Effect.
Help Us To Improve
Please tell us using this form