What Is the Hyperbolic Discounting Effect?

In Critical Thinking, the Hyperbolic Discounting Effect is the tendency to prefer a near reward over a distant one.

Don't judge an imminent reward to be more valuable than a future one just because it will happen soon. That's the Hyperbolic Discounting Effect.

The Hyperbolic Discounting Effect is the tendency to show a preference for a reward that arrives sooner rather than later. Studies show that we are likely to discount the value of the later reward more as the length of the delay increases.

An Example of Hyperbolic Discounting Effect

Two sweets later or one now 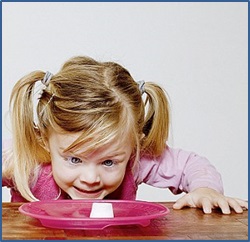 This was an experiment in deferred gratification. Could the future reward outmatch the immediate reward? Well, for most of the children, it couldn't, despite many worthy attempts at imposing self-discipline. Interestingly, some of those who tried to defer their gratification (i.e., wait the 15 minutes) put their hands over the eyes to remove the temptation. This is a version of the Ostrich Effect. It's also interesting that those who resisted the longest tended to do better in their later lives (e.g., better exam results, better jobs). The point is this. Your brain will often opt for an imminent reward over a future one, even if the future one is bigger.

Another Example of Hyperbolic Discounting Effect

Hyperbolic discounting is the reason most attempts at dieting fail. It's a simple concept. The rewards of dieting are so far in the future, your brain is easily distracted from those rewards. Faced with a chocolate biscuit, your brain has no trouble whatsoever giving it a high reward score, and this blots out the distant dieting reward of being slimmer. When you're not faced with an imminent reward (or when you're stuffed to the eyes with such rewards), the brain is very good at focusing back on the distant reward.

This effect can create two personas: now-you and future-you. Now-you lives for the moment, whereas future-you invests wisely. Future-you is the one who bought the gym membership, the exercise bike and the basket full of fruit and veg. Now-you is the one who watches reality TV instead of going to the gym, hangs the shirts over the exercise bike and eats crisps. The secret to stopping now-you destroying future-you's intentions is… God only knows. Hyperbolic discounting is a powerful effect. It gets us all, because it takes real discipline to ignore now-you. 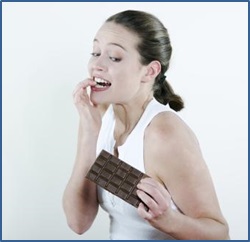 In my experience, the only way to do it is to remove the temptations facing now-you. For example, don't keep chocolate biscuits in the house. Now, that seems pretty obvious, but how do you ensure that? Well, you need to take the battle into future-you's environment. At the point when you buy the chocolate biscuits (i.e., in the shop), the reward they offer is not imminent (you can't scoff them in the shop). Therefore, your thoughts at the point of buying are partially influenced by future-you, not just now-you. However, when you're in the shop, be aware that now-you will often pop up with a clever little trick that plays on your sense of discipline. Now-you will "say" something like: "Buy the biscuits and just have one every couple of days. It's nice to have them in just in case someone else comes around." Don't be fooled. You won't be disciplined. Once the biscuits are home, their reward becomes imminent, and now-you gets its evil way. This is where the Broken Biscuit Effect also starts to come into play. So, the trick is to protect future-you by leaving the biscuits in the shop. Because of how hyperbolic discounting works, not buying them requires far less discipline than not eating them.

"I gotta work out. I keep saying it all the time. I keep saying I gotta start working out. It's been about two months since I've worked out. And I just don't have the time. Which uh... is odd. Because I have the time to go out to dinner. And uh... and watch tv. And uh…try to figure out what my phone number spells in words."
(Ellen DeGeneres) 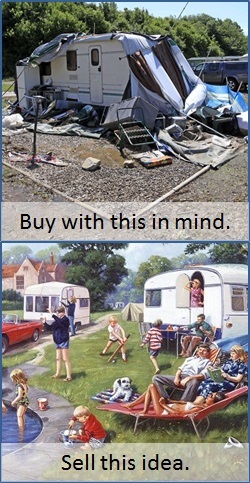 As we've just covered, future-you is a buyer of things you're going to use in the future. That means future-them is a buyer too. Future-them is looking to buy a dream. This means if you're selling something because you're fed up with it or it didn't turn out how you expected (e.g., a caravan), you shouldn't price it based on your disappointment or just to get rid of it. No, have some confidence that your buyer's future-them is just like your future-you when you bought the item. You should price it based on their dream – offer them the dream as well as the caravan. It'll cost you nothing, and their future-them will be convinced. I mean, what do you think they're looking for?

A cramped caravan that's too much effort to hook up to your car and drive to the sea to live amongst equally miserable ant-infested self-caterers? Or a caravan that gives them the freedom to see the UK's coastlines while sitting in the shade of the awning with a cold refreshing beer, listening to the cries of the gulls and watching their steaks sizzle on the BBQ? In all your dealings, buy "the truth" from their now-them, but sell "the dream" to their future-them.

Give smaller rewards now to save money in the long term.


If you are an employer, you might be able to use hyperbolic discounting to your advantage. If you are struggling to fill a position, offer a "golden handshake" (i.e., offer the employee a bonus up front as opposed to at the end of year). Potential employees will be more attracted to it than an end-of-year bonus. Another advantage is that you will probably be able to offer less with a golden handshake, because to the employee, Ł1,000 now is more attractive than Ł2,000 in a year's time.

Summary of the Hyperbolic Discounting Effect

If you think somebody has failed to adhere to a long-term aim because they were "blinded" by a short-term gain, tell them they have been affected by the Hyperbolic Discounting Effect.
Help Us To Improve
Please tell us using this form