What Is the Compromise Effect?

In Critical Thinking, the Compromise Effect is the tendency to avoid an extreme choice and adopt a central position.

Easy Definition of the Compromise Effect

Don't always go for "the one in the middle" to avoid a decision. If you do, you've been influenced by the Compromise Effect.

Academic Definition of the Compromise Effect

When choosing something, the Compromise Effect is the tendency to avoid an extreme choice. Avoiding an extreme choice is often due to the common perception that extremes attract risk. As the middle ground feels safer, decisions that exclude extremes are made far more readily.

An Example of the Compromise Effect

Ŕ la carte menu or just a couple of choices? 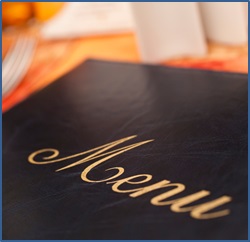 Some sneaky restaurateurs deliberately include an expensive dish at the top of their menus, knowing that most customers will avoid it and select from the not-so-expensive choices. They will also include some cheap choices, knowing that people don't go for those on a special night out. Knowing the types of food people avoid (e.g., liver and stuff they could easily cook at home), the restaurateurs are able to "herd" their diners to the most profitable dishes. So, if you're the type of person who avoids the foie gras (the expensive dish), the kidneys (the horrid dish) and the tomatoes on toast (the cheap, non-special dish),you can expect the chef to knock you up a steak from the job-lot bag of steaks the restaurant just bought from the market. That example might be a little harsh and simplistic, but the point is that many restaurateurs will offer extreme choices and unpopular dishes to steer you to the dishes they want to sell you. They also know that most people are unlikely to pick the most expensive wines or the cheapest (due to the need to maintain a classy façade or avoid embarrassment). So, the middle-ranking wines will be the ones with the highest mark-ups.

Obviously, experience will tell a restaurateur how to fine-tune this idea to the local demographic. For example, putting the highest mark-up on the second cheapest bottle of wine might work in some areas, whereas putting it on the second most expensive might work in others. Whatever the environment dictates, putting high mark-ups on the cheapest or the most expensive choices is unlikely to be as profitable because the Compromise Effect is so entrenched in us all, and people will avoid extreme choices.

A Practical Application for the Compromise Effect 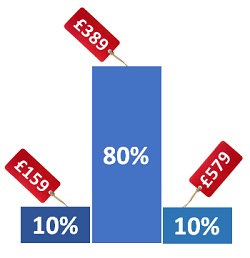 This is a simple way to make a shedload more money. If you're selling stuff (goods or services), make sure you offer at least three things with the middle choice maximised for profit. Here's an example. If a shop sells an expensive TV and a cheap TV, the sales between the two are usually about 50/50. When a third mid-range TV is added, the sales of the other TVs drop dramatically, and the middle choice wins the lion's share of the sales (about 80%). Guess which TV earns the shop the most profit?

Now, be aware that this mass herding towards the middle ground won't happen if the prices are similar. You have to create extremes.

Let's imagine you sell widgets. At the wholesalers, Widget A costs Ł3, Widget B costs Ł4, and Widget C costs Ł5. You could just whack a Ł2 mark-up on each and put them in your shop. But that is unlikely to herd people to what you want to sell them. The trick is to optimise the selection for herding. Do something like this: Most people will now go for Widget B, giving you Ł4 profit per sale. Clearly, there are other dynamics at play. For example, if the widgets are cheaper elsewhere, your stock will be ignored. But the principle is sound. Most people will avoid extreme choices, and you can exploit that.

If you think someone is taking the easy option by avoiding extreme choices, tell them they have succumbed to the Compromise Effect and selected what they perceive to be a safe option.
Help Us To Improve
Please tell us using this form