What Is the Barnum Effect?

In Critical Thinking, the Barnum Effect is the tendency to apply a general description to oneself.

Easy Definition of the Barnum Effect

Don't be taken in by a stranger's general observations about you. If you do, you've been influenced by the Barnum Effect.

Academic Definition of the Barnum Effect

The Barnum Effect occurs when people believe that general descriptions are accurate descriptions that relate to them. This occurs most commonly when describing personality traits.

An Example of the Barnum Effect

You're a great judge of character 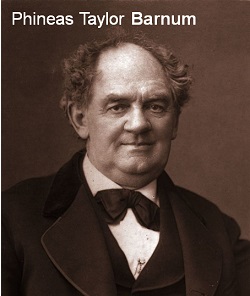 The Barnum Effect gets its name from the American showman and businessman Phineas Taylor Barnum (1810–1891), who earned his money in his early career by running a museum of human curiosities and hoaxes. Although probably not the originator of the quotes, he was certainly influential in promoting "There's a sucker born every minute" and "We have something for everyone." Astrologers and mediums are masters at using the Barnum Effect. Expect them to use words like these: The Barnum Effect works well when preceded by an observable truth. So, if you look like the quiet type, expect something like the first example. If you're wearing a "kiss me quick" hat, expect something like the second example. Astrologers and mediums are superb at generalising and then watching for a reaction. As soon as they spot their "victim" react to something they've mentioned, they zoom in on that subject with more skilfully worded generalisations. These people have an impressive skill with words, and fair play to them for that. They don't, however, have a gift to contact the dead or read the stars.

"If you believe in astrology, you're banned from watching this show."
(Stephen Fry on his TV show QI)

The Barnum Effect can be very convincing. JFK (John Fitzgerald Kennedy), the 35th President of the United States, is said to have used astrology to guide his decision-making.

Another Example of the Barnum Effect

You're a mass murderer 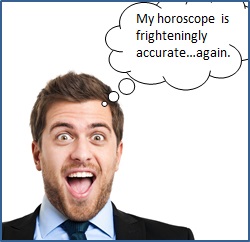 A few years back, a teacher in the US had a horoscope done professionally for an individual known as "Big Ed". He handed a copy of the horoscope to each of his students and told each one it was their horoscope. The students were given 30 minutes to study their "personal" horoscopes. To a man (and a woman), the students thought the horoscope was an accurate description of themselves. Upon reading Big Ed's horoscope, one student delighted "Oh, I love me" and held the pamphlet close to her heart, beaming at "her" positive traits. In fact, the horoscope was so "accurate", it caused those students who were previously sceptical about horoscopes to rethink their scepticism. When the students learnt they'd all been given the same horoscope, they were staggered. Some even looked upset by the trick, especially Ms "Oh, I love me". The worst was still to come. The horoscope they'd been given was that of Edmund Kemper III or "Big Ed". He was a 6'9" serial killer in California in the 1970s. By the age of 15, "Big Ed" had shot both his grandparents. Later, he killed and dismembered six female hitchhikers before murdering his mother and her friend. He was also a necrophile (i.e., sexually attracted to corpses). Welcome to the Barnum Effect, kids.

A Practical Application for the Barnum Effect

Flattery will get you everywhere

Either knowingly or unknowingly, lots of people use the Barnum Effect when chatting someone up. If you've ever been fed a line like any of the ones below, then you've been subjected to the Barnum Effect: The people targeted by such flattery and suggestion are likely to fall for it. In other words, they are likely to think the lines are genuine and that they apply to them (whether they do or not). Why wouldn't they? These ideas apply to all of us, especially from our own perspectives.

You could use the Barnum Effect to chat people up if you wished or, if you're ever on the receiving end, you could recognise it to spot what might be meaningless flattery. But how can you use the Barnum Effect in business? Well, there's a well-tested idea that people do business with people they like. If you're struggling to find a specific business-related compliment to woo a potential business contact, don't worry. Just say something generic, not specific. It's likely to have the same effect. Say something like "I think first impressions count for a lot, and you guys come across as being well on top of your game". It feels like quite a cheap shot when you're saying it, but it's worth a punt, because it's not likely to be received as being a cheap shot. They'll believe you meant it, whether you did or not, and it is likely to put you on the path to being someone they like. This is related to an Appeal to Flattery. And, even if they don't believe it, what crime have you committed? You can't really lose.

If you're good looking or at least better looking than those around you, your Barnum Effect lines will work even more effectively.

Summary of the Barnum Effect

If you think someone is generalising while pretending to be specific, tell them to stop trying to use the Barnum Effect.
Help Us To Improve
Please tell us using this form