What Is Impact Bias?

In Critical Thinking, Impact Bias is overrating the result or length of a future event.

Don't be overly worried about a specific bad event that might happen in the future. The future is unlikely to be disastrous if that event occurs. Similarly, don't think that if a specific good event occurs, your future will be heavenly. That's Impact Bias.

Impact Bias is overestimating the length or the intensity of future feelings in reaction to either good or bad occurrences.

An Example of Impact Bias

It won't be as bad as you think 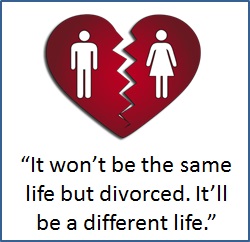 The fear of something bad happening often magnifies how bad you think it will be. Most of the time, the expectation doesn't match the reality. For example, people often say things like "I would never cope if my wife left me". One sports car, a bachelor pad and an insatiable new girlfriend later, they're wondering what they ever saw in her...or him of course...it works for girls too.

Before the bad event occurs, your mind envisages a life focused solely around the bad event. In reality, the bad event is likely to be overshadowed by all sorts of other events happening at the same time.
Former Vice President of the United States, Dan Quayle, is often ridiculed for this quote:

"The future will be better tomorrow."
But, given how Impact Bias works for negative events, he was right.
Charlie Brown (from "Peanuts") had a great philosophy. He said:

"I have a new philosophy. I'm only going to dread one day at a time."
(American cartoonist Charles M. Schulz, 1922-2000)
This philosophy would actually work because your mind won't be able to discount the things that will happen in your more-distant future life.

Another Example of Impact Bias

It won't be as good as you think

Conversely, don't overestimate how long elation will last if something fantastic happens. For example, everyone dreams of winning the lottery and the possibilities that would unlock. However, there are countless lottery winners whose celebrations were short-lived through a realisation that they're still the same people with the same non-money-related issues.
American film director and comedian Woody Allen was joking when he said:

"Money is better than poverty, if only for financial reasons." 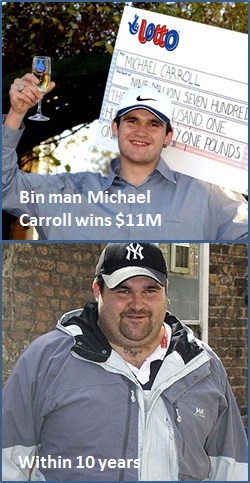 However, because of how Impact Bias works for positive events, he's spot on. Many other things wouldn't change if you suddenly won a truck-load of cash. You probably wouldn't be ecstatic for long.

The pictures show Michael Carrol (a British garbage collector who won $11M on the national lottery at the age of 19). The vast majority of the media reporting on Carrol's fall from grace is exaggerated, but it is clear his happiness did not improve after his windfall.

A Practical Application for Impact Bias

We all know you have to take risks to succeed.
"Great deeds are usually wrought at great risks."
(The Greek historian Herodotus, circa 484 BC – 425 BC)
I can't think of a single successful person who "safed" their way to the top. However, even though we all know this, lots of people are too risk-averse.
"Most people would rather be certain they're miserable than risk being happy."
(Author of self-help books Dr Robert Anthony)
But, if you know that bad things won't be as bad as you think they'll be, you can afford to up your risk appetite. So, crack on. Ignore your brain. Take more risks. 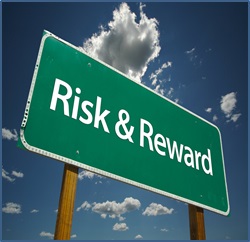 Now, just before you go and spend all your company's cash on some risky venture, I should say this works more for personal risk than for business risk. This is because Impact Bias is something that happens in your brain about your future situation. To understand your business risk fully, you need to assess what the future environment will be like when or after the bad thing happens. There is a lesson to be learnt from personal Impact Bias when doing this: don't forget to factor in how all the elements of your environment will look in the future – not just the thing that could go wrong. There are tried and tested techniques for doing this. If you look up "scenario generation techniques" (or specifically "cone of plausibility"), you'll get a feel for how seriously businesses take this idea when working out their risks.

If you think someone is acting as though a future event will be overly bad or overly good, tell them they are being affected by Impact Bias.
Help Us To Improve
Please tell us using this form