The "Appeal to Flattery Fallacy"

Examples of the Appeal to Flattery Fallacy

Think what I think and I'll think you're great

Here are some examples of the Appeal to Flattery Fallacy: 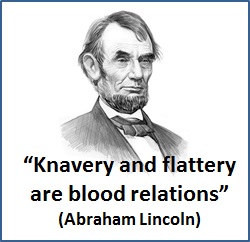 The person presenting these lines wants the person they're targeting to adopt a position that supports the pay freeze. The target feels some pressure to adopt that position because he wants the first part of the argument (the flattery) to be true.

Sometimes, the "flattery" is more subtle, and it's presented in a way that pressures you into not wanting to disappoint the speaker: Sometimes, they come at it from the other direction, and it's not flattery at all: And, sometimes, it's not as clever as any of the above examples, i.e., there is no link between the first part of the argument and the second. Sometimes, it's just a blatant compliment to butter you up before trying to sell the position they want you to adopt.

A Practical Example of Appeal to Flattery Fallacy

Defend against flattery and attack with flattery

Don't let people use this technique on you. It is always worth bearing these two quotes in mind:
"Flattery looks like friendship — just like a wolf looks like a dog."
(Anon)
"Flattery is like cologne water, to be smelt of, not swallowed."
(American humorist Josh Billings, 1818–1885) 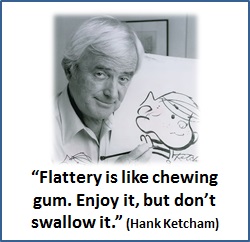 Bear in mind that these arguments don't have to be played out over the time span of one or two uttered sentences. They can be played out over any time span and with great subtlety. So, if your boss suddenly starts being nicer to you or sends you on an away-day to a theme park, be mindful that he might have a longer-term agenda.

Also, be aware that an appeal to flattery is often used in a work context to offload work. For example:

"You're great at PowerPoint presentations. Will you put one together for me please?"

If this is aimed at you, you'll know whether it's right for you to do the presentation or not. Just recognize the flattery so you don't feel you're being made a fool of.

"Of course. Flattery will get you everywhere, boss."