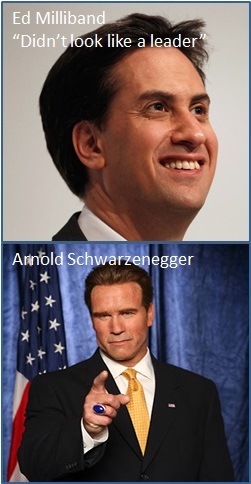 I would estimate that close to half of any population in a developed democracy couldn't describe the differences between their major political parties, and this is quite understandable. Democracy eventually forces political parties to fight for the same middle ground. So, what does differentiate the parties in a developed democracy? Well, it's becoming more about how the leaders look and portray themselves than their policies. Actually, I think that's understating the case. Nowadays, it's almost entirely about how the leaders look and portray themselves.

Unfortunately, politics is becoming far more of a beauty pageant than it ought to be. But that's life, because Good Looking People Bias is rife, and most of us will give more weight to the opinions of good-looking people. This is directly linked to the Halo Effect, which is when you judge someone positively because of a known positive trait (in this case, looks). When it comes to politics, we probably ought to be voting based on the content of the parties' manifestos, but lots of us don't think about the policies at all. Provided we're not just voting how we always do or how our parents did, then we tend to vote based on the party leaders' personal traits, like looks, bearing, and confidence. I'm not saying these things aren't important. I'm just saying that traits like looks all too often play far too big a role in how we reach decisions. 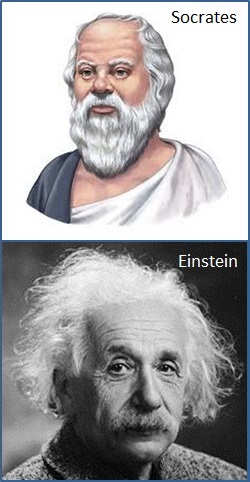 Those suffering from Good Looking People Bias think the handsome and pretty are more talented, more honest, and cleverer than not-so-good-looking people. It's quite a natural thing to do. Many of us suffer from this bias. But just remember, most of the smart people in history were pretty average looking...at best.
"The average woman would rather have beauty than brains because the average man can see better than he can think."
(Anon)

You're too late, sir. You might still make it, lads

The check-in for my flight from Luton to Belfast was about to close. Still being two minutes away from the airport in a hire car (which I still had to hand in), I was in trouble. To give myself a chance of making the flight, I decided to park in the drop-off-only bay outside the terminal and check in before handing the hire car back. The young girl manning the check-in desk was just about to close up, and she made it pretty clear that my last-second arrival was something of an inconvenience. I quickly answered the "did you pack your own bag"-type questions and handed her my holdall. She reluctantly tagged it up and ordered me to go immediately to the boarding gate. I thanked her, nodded and sprinted outside to the hire car. Just as I was leaving the check-in desk, a fairly chubby dishevelled man skidded up behind me trying to get on the same flight. I heard the young girl say: "I'm sorry. Check-in has closed." I did not hang around for the argument that was about to ensue. 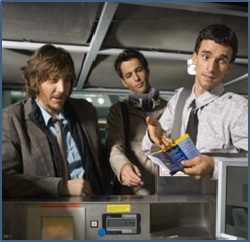 I jumped in the car, raced to the hire-car centre, handed the car in and jumped on the bus back to the terminal. While on the dawdling bus, I heard four young Irish lads worrying about whether they were going to make their flight. I asked them if they were on the same flight as me to Belfast. They were. I asked if they'd already checked in. They hadn't. I decided to put them out their misery and explained that the check-in had closed about 20 minutes ago. I told them that even the person who was just five seconds behind me had failed to make it. When the bus finally arrived at the terminal, I hurriedly made my way to the aircraft boarding gate while the cheery Irish lads, who looked more like a boy band than the stag party they were, strolled off to find the check-in desk.

By the skin of my teeth, I made the flight. Just as I was getting comfortable in my seat, I saw the four Westlife lookalikes skipping down the aircraft aisle. "How on Earth did you get on this flight?" I asked. "A nice smile and Irish charm", answered one. He was right. That's exactly what got them on the flight.

So, the next time, you're having a spat with someone in the service industry, send your best-looking person forward to do the negotiating. Because of Good Looking People Bias, your best-looking person is likely to win more favour than anyone else in your group. Oh, and if you're ever getting grief off airline check-in staff who are dogmatically laying down the law with comments like "the rules state...", "the captain says...", etc., then the situation might be worse than you think – they probably think you're ugly to boot.

This is simple. Use aesthetically pleasing people as your company's frontmen (or women). Actually, it's not quite that simple, because there might be another factor at play: jealousy of someone's good looks. This can affect your frontman in two ways:

(1) Some people are threatened by good-looking people encroaching on their "territory" (e.g., a self-obsessed or predatory boss), and they might find reasons not to invite him back.

(2) Some people will actively look for competency flaws to undermine your good-looking person. (This is a common manifestation of jealousy. It's at the root of blonde jokes, e.g. Q. Why did the blonde lose her job in M & M factory? A. She kept rejecting all the Ws.)

So, if you can find a competent, good-looking person who's not a threat to anyone in the target environment (e.g., he's too old, too young or just a very infrequent visitor), then your company is more likely to impress. You might now be thinking that using a good-looking frontman is more hassle than it's worth, but I suspect it's not. Good Looking People Bias is deeply engrained in us all. Good looks are a powerful catalyst to get stuff done. Be aware though that you can't go around recruiting people based on their good looks. That's likely to be against the law. In 2010, Prada Japan found itself in hot water after a senior retail manager announced she was asked to "eliminate any staff deemed old, fat, ugly, disgusting or not having the Prada look." The order reportedly came from Prada Japan's CEO.

Of course, there's a strong argument that the fashion industry should be allowed to discriminate based on looks. But it didn't save them, so it probably won't save you. You also can't hire a pretty or handsome person because you hired an ugly one last year. That's Moral Credential Bias.